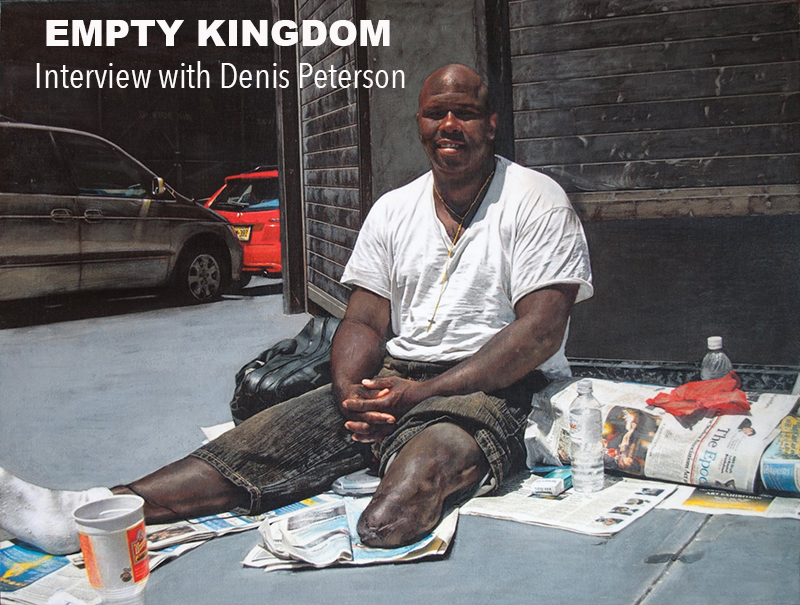 Denis Peterson’s work is soulful and gorgeous. He depicts the humanity and dignity inherent to the human experience. We are honored to say that one of his amazing pieces will be coming to the Empty Kingdom Summer Show. After reading his interview I spent the afternoon in the park talking to two homeless gentlemen and was incredibly thankful for the humility gained from just shutting up and listening to strangers talk about their lives. What will you do? - Empty Kingdom

EK: You have worked a lot on spotlighting homeless and indigent populations. How has such proximity to homeless populations affected you personally? How has it changed your worldview? How close are you to your subjects?

DP: Despite common misperceptions to the contrary, New York’s diverse population is fairly open and easy to penetrate on a basic human level. Homeless populations are a part of my world wherever I go, and although I empathize with them, I also realize the realities of life. Therefore, I discriminate as to who I might consider for a piece of work, and often that happens quite naturally as events unfold.

For example, in Vortex, I was walking though the city considering areas that I found interesting when I was approached by the subject who initially accused me of trying to photograph him without paying my way. Eventually, he willingly posed in this now somewhat famous piece. A few years later, I was in an entirely different part of town filming an intersection at night when he literally walked right into my lens!

Of course, we spent some time talking and comparing notes as to his life on the streets. I always spend time with my subjects, trying to know them prior to presenting them as painting subjects. As to a worldview, it only serves to strengthen it in the sense that most people are not prepared to deal with the unknown. It is not due to callousness or indifference, but to the way our society is structured.

EK: What was your upbringing like? Were your parents worldly? Were you exposed to other cultures? How did you first become interested in the homeless population? Why is painting them important to you?

DP: Raised in a tiny attached house in Brooklyn, New York. Relatively poor by today’s standards, but always appreciative of whatever we had. As children, my parents escaped the terrifying genocide in Armenia, yet not worldly in that they always opened their hearts and minds to others in need.

I remember one time my father walked me to the fishing piers and pointed out another boy who was fishing. My father told me he was fishing for his family dinner, but had caught nothing by the end of the day. My father walked the boy over to a hot dog stand and bought enough for him and his several siblings. It probably cut into our food budget, but my father lived the principle of giving to others in need without regard to self.

I found an intriguing aesthetic and a cultural conflict in the homeless, one that focuses less on the decorative and more on the intuitive connection between the viewer and his/her own perceptions of their status in society by using my subjects as mirrors, rather than as mere objects.

EK: How do you hope your viewers to respond to your work? What kind of impact do you think you have had on the world with your art? Do you think or hope to have humanized a population of people that is oft ignored or written off by society? What can we do to help address the problem of homelessness? From your direct interactions, what do you think can be done to help the situation?

DP: First and foremost I look for a response to painting quality and impact on viewers. I have received thousands of letters, often from other artists, acknowledging an awakening in their social consciousness. It is not something I set out to accomplish, but satisfying nonetheless. Certainly, I have humanized a sector of the populace wherein viewers universally recognize the dichotomy of admiring work and expression about subjects who they otherwise ignore. Many of these people are on the street by no fault of their own. If you or I ran out of money, job, etc. and were left to beg on the street not unlike these painting subjects, we would not have the solution. And unfortunately as an artist, I can only present a challenge to the solution.

EK: Do you think hyperrealism will become a moment in art history? Do you consider it a new movement? What are it’s direct roots? Where was it birthed from? What has it influenced? Do you think there are new places to go with art?

DP: Hyperrealism is absolutely a moment in art history. In fact, Dust to Dust was specifically selected as a painting that introduced the hyperrealist movement on an art history timeline in two prominent art history textbooks. It is indeed a new movement, one which I helped to promote as such.

When I began identifying my art as hyperreal, it was after studying Bouldrillard’s philosophical works on Hyperrealism. He basically identified it as a alternate reality that we are surrounded by, but one which we seldom recognize due to its artificialities and commoditization, etc. At the time, I had been struggling with my recognition of the passing of Photorealism as a redundant artform, a movement that I had initially been a part of. I decided to introduce cultural, societal, and commercial dimensions into my work and maintain a connection with the falsities created by photography as to alternate realities that captured a hyperreal image. I called it hyperrealism, which immediately caught on in the art community.

I later learned that it had previously been used in Europe as an alternate term for photorealism. I wrote articles on the movement, spoke with gallerists and with many other painters in an attempt to redefine a new structure for painting, and ultimately, it became recognized. Since then, it has burgeoned into many other forms so to speak. It has certainly influenced the way we look at art as opposed to photography, computer images, etc.

And yes, there are other places to go with art for sure. Art is and has always been a reflection on societies and cultures. With that specifically in mind, I am hoping to introduce a new and likely controversial motif very soon in a new series, soon to be completed.

EK: Can you talk about the piece you’re shipping to 111 Minna? Where is it? Who is in it? What does it mean to you?

DP: Weight of the Stone is a small study I did in conjunction with a much larger painting of the same subject. It is one of my favorite pieces, as I spent an entire day with the subject in NYC after running into him while headed to an art store. The subject had lost his leg after being run over by a truck while being chased by store security personnel.

He recognized the reasons he was in his situation and readily accepted them as a way for him to become a better person and follower of Christ. As a work of art, it has meaning to me as a particular cultural statement. Here is this humble man with an amputated leg surrounded by his few belongings strewn on a city sidewalk and framed by vehicles of the privileged. His demeanor and expression are his message to others.

As to the aesthetic, I chose the brighter colors to emphasize the artificial, and the more somber colors to accentuate the despair. I particularly chose to detail the newspapers to connect him with who he was intellectually. And ironically, there is the “Art Exhibition" headline on a flyer next to him, something I didn’t see until I had almost completed the work.

EK: As an achieved artist, what would you attribute your success to? It would be trite to presume there is something as simple as a recipe for success but what was your first big break? What/ where was your first show? What have you learned along the way that you can pass on to younger artists?

DP: Hard work and staying the course. That means never giving up on your work and never giving up on yourself. Basically, I was always passionate about painting. It is a process of learning new methods and novel techniques through sheer experimentation with different media. My first big break was likely my show at the Brooklyn Museum. Not that the whole world began to rotate in a new direction, but it validated my belief in my own work. If selling one’s work becomes the measure of one’s success, most artists will fail at the starting blocks. Good work becomes recognized for originality, quality, strength of the visual statement, compositional integrity, novelty of style, and ultimately power of expression.

If you intend on selling work through galleries, make sure that you have enough work of consistent style and finish to replenish from show to show. More importantly, don’t compromise your artistic purpose and artistic statement. It takes time, hard work and dedication to purpose.

EK: What are you working on at the moment? What do you want to talk about right now?

DP: The new series is purely figurative and deals with multi-layered issues pertaining to one’s perceptions of beauty, sensuality, movement, form, life, death, and our connectivity with others. It challenges all of my experience and talent as an artist to the core, as it draws on a whole set of new techniques and approaches to the canvas that I have never tried before. I am extraordinarily drawn to doing this series and achieving new levels of hyperrealism in its true sense of altered realities.

I will likely lose a whole lot of people with this one, but if so, well then only time will tell…